Until I started research for my novel series, I knew little about Native Americans other than what I’d seen on TV. You know, half-naked savages, mostly Navajo and Apache, screaming Ayyyyaaaayayaaaaa as they get shot off their horses by white guys.

At History.com , I was surprised to discover that when European adventurers arrived in the Americas during the 15th century A.D., scholars estimate more than 50 million people already lived there. Of these, around 10 million resided in what would become the United States.

In order to keep track of all these contiguous peoples, anthropologists and geographers divided those with similar habitats and characteristics into ten culture areas.

Due to those Hollywood westerns, I’d heard of the Plains Indians, such as the Crow, Cheyenne, and Comanche, and the Southeast Cherokee and the Southwest Navajo and Apache, but many of the other Native Americans in these groupings were new to me.

On continued research, I learned that some of these groups could be broken down even further.

When I zeroed in on the Native Americans of the Carmel Valley and Ventana Wilderness, for example, I came across an additional group of California Indians I’d never heard of before.

According to Betty War Brusa in her book, “Salinan Indians of California and their Neighbors,” the Esselen were among the least populous of California Indians, their number estimated at from 500-1,000. Their territory comprised the upper watershed of the Carmel River, the Big Sur River, and about 25 miles of coast from near Point Sur to Point Lopez.

Little is known about the Esselen. Their presence in Central California dates back 10,000 years. They are commonly thought to have been “missionized” out of existence to near extinction. Mission priests pressed them into indentured service and introduced diseases against which they had no immunity.

The Esselen are part of the Salinan, Esselen, and Costanoan culture referred to as the Ohlone/ Costanoan Esselen Nation or OCEN. 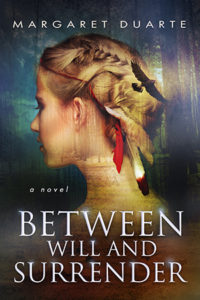 Between Will and Surrender and the Esselen

Marjorie Veil discovers that she’s a descendant of intermarried Rumsen Costanoan and Esselen of the Mission San Carlos Borromeo, otherwise known as the Ohlone/Costanoan Esselen Nation. Native American? Not Dutch and Italian as she’d been led to believe for twenty-eight years? It feels as if she’a melting and re-solidifying into a person she doesn’t know.

She had come to Carmel Valley to find herself; did this count? The puzzle pieces are scattered all over the place, and she has no idea how they fit together.

Marjorie contacts Ben Gentle Bear Mendoza, a descendant of the Esselen tribe, thus familiar with its history—a history of special interest to her now that she knows the Esselen are her ancestors, too.

Ben guides her on horseback through the Ventura Wilderness, home of the Esselen. She takes in the unfolding meadows and valleys of pine and experiences a renewed appreciation for the sun, the wind, and the texture of the earth. Questions that had seemed so important to her only moments before dissolve like unremembered dreams.

Then Ben shows Marjorie something she has never expected to see on this earth: towering rocks plunging into a crater-like valley. Far below runs a river, only to end in a waterfall that, even at this distance, conveys nature’s power when allowed to follow its own course.

To further spotlight an already over-the-top display of nature’s ability to impress, rays of light shimmer through blinding white clouds. And Marjorie and Ben are all alone to capture this miracle, two travelers on the planet peace.

“This is where the story begins,” Ben says. Then he proceeds to tell Marjorie about the Esselen, the first inhabitants of the Santa Lucia Mountains, of their close ties to nature and their reverence for the spirit of this land. “The Esselen were healthy and free,” Ben says, “rich in all that mattered. They didn’t need to farm or labor ten hours a day. The women gathered food, cooked, and wove baskets, which sometimes took a year to create. The men hunted with bows and arrows that they’d made themselves. All in all, they lived off the land and their simple system worked.”

Stories of the Esselen are sprinkled throughout book one of my “Enter the Between” novel series:  Between Will and Surrender. To read more, the book is available at Amazon.

Join me next post for an introduction to Earth Medicine and Medicine Wheel teachings, introduced by Marjorie’s new friend, Ben Gentle Bear Mendoza.

The post Esselen People are not Extinct appeared first on Margaret Duarte.